Hey, I’m posting on the Blog again! Only 8 years later.

What the heck is nibbled armor plating, you ask? Well, anyone who’s a fan of Star Wars is familiar with the Millennium Falcon, and it uses this technique all over the place.

ILM model makers use a tool called a nibbler to cut those holes out – It’s a very distinctively “Star Wars” look, and is used on many of the models in the series.

So in this post, I’m gonna show you how to quickly make this sort of armor plating with a minimum of effort, and nice results. Before we begin, we’re going to need to snag some scripts for 3dsmax. The first is a spline selector tool:
http://www.scriptspot.com/3ds-max/scripts/spline-select-tool

The third is a general random selector for editable polys. This isn’t used for the plating itself, but to add variety to the resulting armor panels:
http://www.hedfiles.net/random_selector_v3.1.mse

The fourth is a vertex cleaning tool – This comes in handy for cleaning up Boolean operations as well as other 3dsMAX procedural operations.
http://www.scriptspot.com/3ds-max/scripts/vertex-cleaner

So, let’s get started with a simple example. Here’s a plane, 40×40 subdivisions.

While you have the plane selected, hit #1, then #2, then #3 on that topology window. This should generate the result shown above, or something very like it. Now select all the verts!

Then run the vertex cleaner tool that you downloaded earlier:

Then give it a smallish angle, like 2deg. You can see it’s selected all the mid-line vertices. hit “Clean It”!

Now, since there are fewer edges for MAX to work with here, this step looks janky, but there is a way to fix this. Before we do so, though, there is another step. Select all your edges and hit “Create Shape from Selection” and set to linear. with those same edges selected, chamfer the edges. You’ll need to do it twice, both times with the mode set to “open chamfer”. The first time, set the width to 0, and then the second time set it to a small amount, like .1.

Still janky, let’s fix it! Apply a “Turn to Poly” modifier, with the following settings.

This should fix most of the issues.

Now we get to the fun part. Remember that spline you selected earlier? Go ahead and select it, and make it renderable.

I give it a radius of .75, 4 sides, and rotate it 45deg. These are important, as you want simple square shapes to ensure clean booleans later. The next step is to add a “Normalize Spline” modifier.

I set them to a length of 1, make the segments linear, remove the count restraint, and this looks good! Let’s collapse to an editable spline. Next, power up the random spline segment material assign tool.

I set it to a range of 1-15, and hit randomize. Now, select a random number from that in the Material ID Select field of the spline.

Then, holding down shift, drag the selected segements a very slight amount in the viewport to duplicate them. Then detach the new spline segments.

You should have something very similar to this. Now select your main plane, and bring up the general random selector, set it to Element mode, and select 50% of your panels. Detach them.

Add a shell modifier to the two new panel objects – I used an inner and outer amount of 0.1. Select all these objects, and convert to Editable Poly. Pick one of the panel models, go to ProBoolean and subtract one of the little sets of boxes. Repeat the process with the other panel object, and the other set of little boxes.

Boom! Done. You can use a more manual method of selecting the 50% of panels that get 1/2 of the nibble notches – I find a even/odd checkerboard selection works the best.

Art I like, and want to emulate: Ian Mcque Part 1 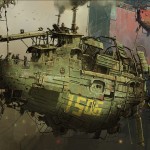 So, a while back I came across art by Ian Mcque – http://mcqueconcept.blogspot.com/ He’s got this really awesome style, sort of a highly colorful, painted scrapyard look, with swooping curves, Asian influences, and gigantic floating structures in the clouds. In … Continue reading →

Let the games begin! Or not. Whatever. I’ve had an empty base page for so long, it’s a bit ridiculous.  I will now be using this blog as my art and game design homepage – Anything of interest I will post here.

Hooray for TwentyTwelve, and hopefully this joint doesn’t waste away to nothing.